How to Remove Limescale from Your Toilet

The modern-day lavatory is one of the greatest leaps of mankind in the history of indoor plumbing. Our loo can be anything from a place to do the unmentionable, to a place of refuge after a stressful day. That’s why we must treat our toilets with the utmost love and respect. And not only because limescale and grime is unsightly to look at, but because it can also be damaging. Here’s our guide on how to remove limescale from your toilet.

Limescale – What is it?

Before we attempt to tackle limescale, we need to know what it is. Limescale consists mainly of calcium carbonate (CaCO3. Limescale is also known as “hard water”. It’s generally found in kettles, hot water pipes, boilers, and toilets. Generally in places where hot water, with the so-called “hard water” in it, evaporates and leaves the dry white hardness that is limescale. It can then with time discolour in a very unsightly manner. The colours vary from a wide range of colours. These colours can be whitish, light brown, reddish-brown, pinkish brown, or even dark brown.

How to Remove Limescale from Your Toilet?

Now, there are a lot of myths out there, a few of which we will de-bunk further down. But for now, we’ll give you the best options for DIY toilet cleaning. First things first, here’s a list of things you will need before tackling the limescale:

That’s it! You could also stick to shop-bought products (not bleach) if you prefer, but the highly-acidic nature of vinegar is sure to get the job done. The choice is all yours! Now, here’s our method to the madness:

1. How to remove limescale from your toilet with sandpaper?

Get your medium-grain sandpaper ready. Now you’re all set. Start gently rubbing the limescale area. Keep doing so until you get to the thinnest and last layer of limescale. Now, you don’t want to scratch your glorious toilet bowl, so now it’s time to crack out the fine-grain sandpaper. Use it to gently buff the area, slowly but surely getting rid of the nasty limescale. When you are done, flush the toilet to remove the residue. Proceed to clean your toilet as per usual.

2. How to remove limescale from your toilet with vinegar?

Pour a litre of white vinegar down the toilet bowl. Soak the toilet nicely, getting all the edges of the bowl. Leave to sit for a good 3-4 hours before moving on to the next step. Next, get a good toilet brush, scrubbing brush, or anything with a rough surface that is suitable for the job of scrubbing the toilet bowl. Scrub the afflicted area, and everywhere else, thoroughly while adding more vinegar. Now flush the loo to wash away all residue. Repeat this process until you’ve conquered the devilish limescale. 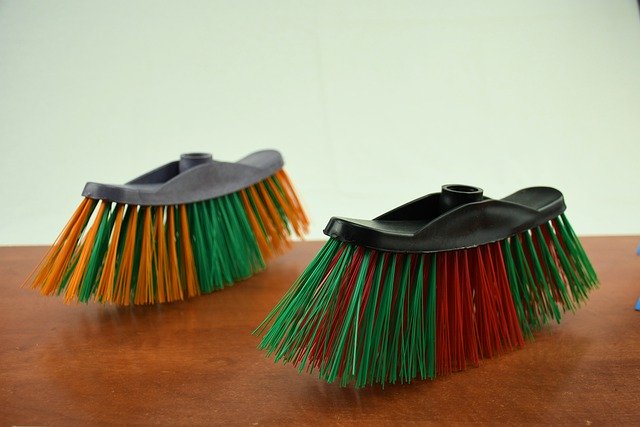 Now, there are a lot of limescale myths out there. That’s why we’re here today to let you know how NOT to remove limescale from your toilet. So, as far as we can see, there are 2 main limescale removal myths out there that we have tried and tested. They are a definite NO for toilet cleaning. Here are the top two most unreliable methods for removing limescale:

Bleach is a trusty household friend. It helps with pretty much everything around the house. From grease stains, to darkened surfaces – bleach is your product for the job. But, unfortunately, this is not the case when it comes to limescale. When you use bleach on limescale it doesn’t remove it at all. It only lightens it, giving the illusion that it’s worked. This, in the long run, is far more dangerous to your toilet than helpful. Built-up limescale can cause serious toilet blockage.

This is another hard NO. When Crown Cleaners tried coca-cola on the limescale stain, we were left with an even worse discolouration. The idea behind the coca-cola method is that the acidic nature will break down and get rid of the limescale. But, unfortunately, that’s not how it works. All you get is a more cola coloured limescale stain.

Don’t forget to check out our other helpful posts, here’s one for you: How to Clean Windows and Glass Without Leaving Streaks.